Will Your Nest Egg Suffer Collateral Damage In A Trade War? 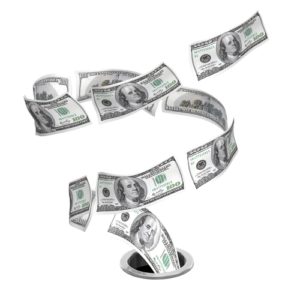 The politically motivated press is having a heyday with the Trump Tariffs and ensuing trade war. Trump calls it negotiations while much of the media predicts Armageddon. How does an individual investor sort through all the media hype, separate facts from hyperbole, and protect their life savings?

Good friend Jeff Clark’s recent article, “The Russians Are Coming! The Gold/Treasury Inversion Speeds up” outlined some facts that got my attention:

“Russia sold half of their total Treasury holdings in one month!“ 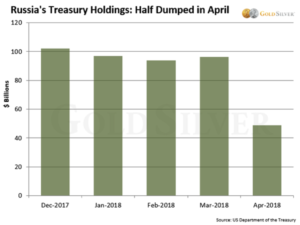 “This most recent liquidation conforms to a larger trend initiated by the Russian central bank seven years ago. Since 2011, Treasury holdings have been slashed by over two-thirds, from over $150 billion to less than $50 billion. It’s clear that Russia wants to get rid of US Treasury securities.”

Jeff shows us what the Russians are doing with their billions:

“At the same time Russia is dumping Treasuries, they also continue to buy lots and lots of gold. Their central bank added another 600,000 ounces (18.66 tonnes) to its reserves in May. It now owns a whopping 62 million ounces!

Here’s what their accumulation looks like, from our friend Nick Laird at goldchartsrus: 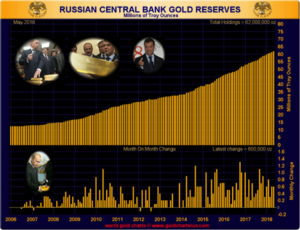 We don’t want foreigners selling our treasuries, we need them to buy even more or interest rates could go sky high!

I contacted Jeff to get his comments.

DENNIS: Jeff, on behalf of our readers, thanks for your time. Let’s get right to it.

The Fed is unloading close to $4 trillion in debt, on top of government deficits approaching a trillion dollars. Are other countries dumping US debt as opposed to borrowing more?

JEFF: Thanks for inviting me, Dennis. Yes. Russia dumped half of their Treasury holdings in April. But it’s not just Russia; Turkey’s central bank has sold nearly half of its US Treasury holdings since November.

Norway has reduced its share of US debt by 40% since last September. In April alone, we also saw Japan, China, Ireland, the UK, and Switzerland all sell US Treasuries.

At the same time, we’re selling more debt than ever before. The US sold almost a half-trillion in the first quarter of this year, the most ever in American history. Analysts tell us we’ll need to sell even more over the next few years. It could cause some big problems.

DENNIS: I’d anticipate interest rates would have to go up. The Peter G. Peterson Foundation article, “Higher Interest Rates Will Raise Interest Costs On The National Debt tells us: 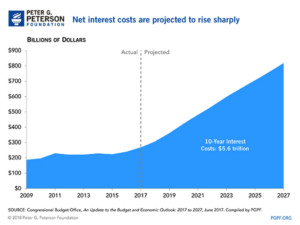 Interest costs are expected to continue climbing beyond the next 10 years and are projected to be the third largest category in the federal budget by 2026 (after just Social Security and Medicare)….”

Wouldn’t that put a terrible drag on the economy?

JEFF: Naturally. It’s not any different than if you had $50,000 in credit card debt. The interest payments alone would eat a large portion of your monthly income. It weighs you down financially, leaving you very little room for error.

As interest rates go up even more of your income is going toward debt. It gives you very little ability to maneuver financially. That’s exactly the position our government is in, because of their enormous debt load. Interest costs eat a larger portion of the pie, leaving less money for other government expenses. They have few options and little flexibility.

Many studies have shown there is a direct correlation between debt levels and monetary shocks. The higher your debt, the more vulnerable you are to a financial shock, whether you’re a family of four or a country of millions. Everything has to go just right for you to avoid a financial calamity – and of course, everything going “just right” rarely happens in the real world.

DENNIS: Our readers are worried about protecting their life savings. The market is ripe for a major (if not epic) correction. How has gold performed during market corrections?

JEFF: We have data on this. Here’s a chart that shows how gold has performed during the eight biggest stock market crashes in the last 40 years. 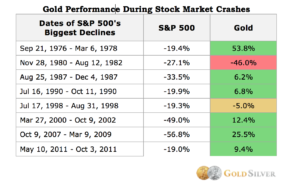 In most cases, gold rose during the biggest declines in the S&P. The one-time gold crashed with the stock market was just after its biggest bull market in modern history.

This information can be very practical. If your portfolio crashes by 50%, you’re down 50%. But if you have a gold hedge in place and it rises when stocks fall, you’ve just buffered your losses. This is the kind of thing gold can do for investors.

JEFF: We can’t guarantee future results, but here’s an example.

If the S&P fell 30%, which is the average of the declines in the chart above, but gold rose 25% in response, that portfolio would be down only 19% instead of down 30%. It would be down less (or even up) if they held an overweight position in gold. I’m personally underweight common stocks and overweight gold, given the risks embedded in the financial system right now and how overvalued many assets are.

DENNIS: We interview our mutual friend Ed Steer regularly. How do you answer those who don’t want to invest in gold because they feel the market is manipulated?

JEFF: It is clear precious metals prices are manipulated – people are being prosecuted for doing so.

But that doesn’t change the reality of what can and will happen to the gold market when things reverse. And things will reverse – a casual look at history shows no trend lasts forever, and many asset classes are overvalued or in a bubble now.

Once stock markets begin to decline, real estate goes soft, inflation kicks in, or debt blows up somewhere (or all of the above), then governments will undoubtedly intervene in their typical reckless fashion and investors will seek a financial safe haven.

Factor in the inevitable decline in new supply for both gold and silver and you have the set-up for a price run that is greater than what we saw in the 1970s. The manipulation will be broken at some point, as it has many times throughout history, and there will be very few places to run and hide financially outside of gold.

DENNIS: That makes sense. Investors need to protect themselves against crisis and metals are historically the most reliable way to do so. But with stocks still going up and economic growth still positive, is there really a crisis on the horizon?

JEFF: I’m glad you asked. Our founder, Mike Maloney, just completed his biggest economic update in years, called the Early Warning. The comprehensive presentation details why he thinks the next crisis will be one for the record books – easily much worse than 2008.

Partly because there are so many overvalued assets out there, and partly because the US dollar is getting more and more unstable. There are numerous factors, and Mike covers all of the major ones in this video. It’s getting terrific feedback.

DENNIS: Jeff, after watching the entire video, I decided to highlight it for our readers.

The last time the Fed intervened, they bailed out the banks at the expense of seniors and savers. When the retirement dreams of several generations went up in smoke, Fed Chairman Ben Bernanke referred to the impact on savers as “collateral damage”.

We were blind-sided in 2008, and I sure as hell don’t want it to happen again.

Each investor is responsible for protecting their own nest egg. It’s common knowledge the government wants to inflate their way out of debt. What I like about the video is it clearly explains what lies ahead, so educated investors can take precautions. Jeff, thanks again for your time.

JEFF: Dennis, I agree with you. Gold is real money and right now it’s the best insurance policy available. My pleasure Dennis.

Dennis here. While we may be in a trade war, it might be a spark that ignites something much bigger. Those who only suffer collateral damage may end up being the big winners. Be prepared, stay vigilant and be patient. Profit opportunities will follow the inevitable collapse.

I had not planned to promote Mike’s new video. After watching it, I changed my mind. Anyone having second thoughts about “this time it’s different” is right. Bonds, stocks and real estate are all in high danger zones.

Their generous early bird discount and money back guarantee makes it risk-free. I’m told the video series is getting terrific feedback! That’s not surprising.

The Arizona desert is very hot again, daily highs are in the triple digits here in the valley. We head to Prescott for August to cool off. It didn’t take us long to realize that cooler temperatures would be welcome.

Friend Phil C. sent along the humor for this week. What would happen if it was true??? 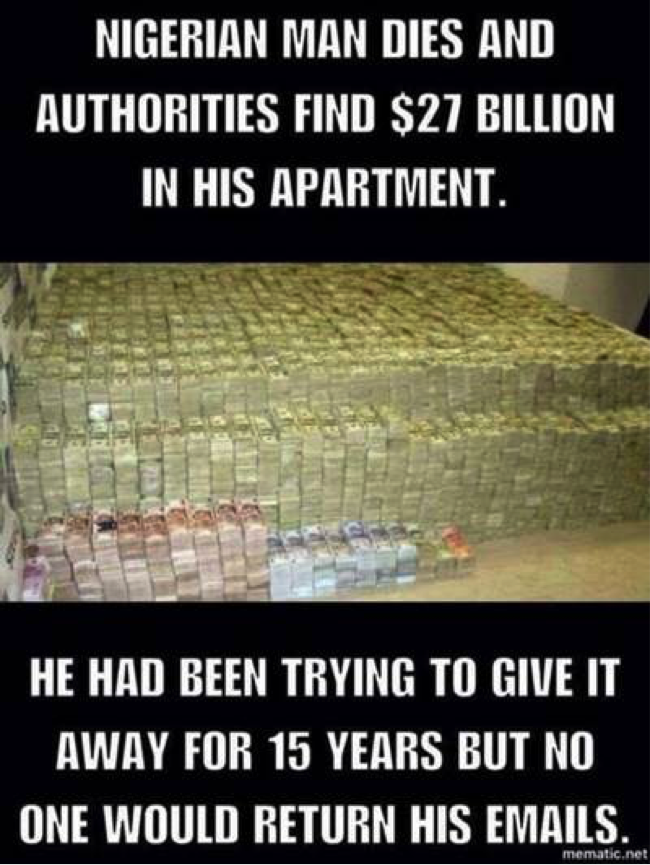