Witnessing History on the Deck of the Titanic 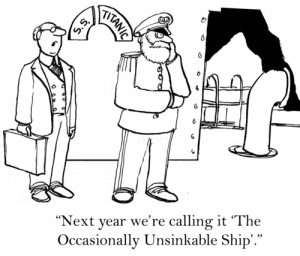 Does anyone believe that people standing on the deck of a sinking Titanic would be overcome by the emotion of “witnessing history”? I believe survival would be more appropriate.

I opened my inbox and found MarketWatch and four other publications referencing a Bank of America Merrill Lynch (BOAML) report “Interest Rates at Lowest Level in 5,000 years”.

CNBC goes one step further in their article “$12 trillion of QE and the lowest rates in 5,000 years…for this?”

“The numbers are daunting if not shocking: $12.3 trillion of money printing, nearly $10 trillion in negative-yielding global bonds, 654 interest rate cuts since Lehman Brothers collapsed in 2008.

Those actions have resulted in global growth in advanced economies that likely won’t eclipse 2 percent this year, inflation levels that remain well below targets and a burgeoning global debt problem that remains unresolved, withstood only through the lowest interest rates the world has seen in 5,000 years.

Put together, it all amounts to the “astonishing history investors are living through today,” (emphasis mine) said Michael Hartnett, chief investment strategist at Bank of America Merrill Lynch who compiled the aforementioned statistics.”

The BOAML charts tell the story: 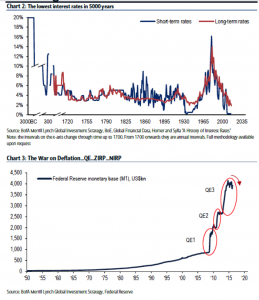 “The World Bank recently slashed its expectations for gross domestic product, cutting its 2016 global estimate to 2.4 percent from 2.9 percent, from 2.2 percent to 1.7 percent for advanced economies and from 2.7 percent all the way down to 1.9 percent for the United States. Growth in Japan, despite trillions of QE, is projected at just 0.5 percent, and the euro area, which also has been actively easing, is put at 1.6 percent.”

They predict, “Investors expect the Fed and other central banks to hold fast to accommodative policies, despite their waning effectiveness.”

Ignoring the evidence that the policies have not worked, they continue with the same behavior expecting a different result.

Reuters reports: “Japan policymakers to meet on markets, Bernanke to talk with Abe”. There is much speculation about the purpose of the meeting with the former chairman of the Federal Reserve:

“… Some market players speculate (Bank of Japan Governor) Kuroda might decide, in a surprise, to provide “helicopter money” – a term coined by American economist Milton Friedman and cited by Bernanke…. as a way to seek to fight deflation.

The BOJ governor has repeatedly denied that the BOJ would adopt such a policy, saying it is an “impossible” option under current law separating the government’s role in fiscal policy from the BOJ’s in monetary policy.”

Bernanke flew halfway across the world for a 30 minute meeting with Prime Minister Shinzo Abe – why? Bernanke did not speak with reporters. The Wall Street Journal also speculated they discussed “helicopter money”, a radical form of monetary easing advocated by the former Fed Chief:

“Mr. Bernanke noted during the face-to-face meeting that Japan’s central bank still has a range of monetary easing measures at its disposal…”

Why consult with Bernanke, “who led the Fed through the global financial crisis in 2008”? He led the US in the wrong direction as I outlined in my “Open Letter to Ben Bernanke”.

The New York Times article, “Japan Vote Strengthens Shinzo Abe’s Goal to Change Constitution”, coupled with the current problems in the South China Sea, is cause for raised eyebrows:

“Whether Mr. Abe will be able to pursue that ambition – to overturn the constitutional clause that calls for the complete renunciation of war – remains to be seen.”

If they are going to change the Constitution, they might as well make “helicopter money” legal at the same time.

The US tried “Helicopter Money” and it failed. The Bush tax cuts included sending out checks to approximately 130 million households. The University of Michigan did a survey to gauge the effectiveness of the “helicopter money”. The results are summed up in one simple graph: 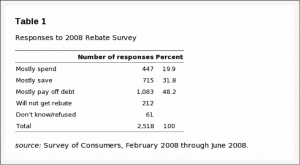 Almost 80% of the money went to debt reduction and savings. That does not stimulate an economy. The Japanese government should use Bernanke as an example of what NOT to do!

Nor does helicopter money work for businesses. Current low interest rates have not spurred expanding facilities and job growth. Instead corporations are increasing dividends and buying back stock at a record pace.

Don’t buy the hype! Our economy is not improving and retirees are struggling. As I wrote last week, St. Louis Fed Chief Bullard favors only one more interest-rate increase through 2018 because he no longer expects the U.S. economy to pick up during that time.”

The central banks in Japan, the European Union, China and the US have been trying to prime the pump by creating easy money and low interest rates and it’s been ineffective.

Who will win the currency war? If one currency inflates rapidly investor’s will quickly dump that currency causing others to rise. Will that cause other central banks to step up their printing fearing economic slowdown? Will central banks continuing to create trillions eventually sink the ship? Probably, but no one knows when, who goes down first, or how deep the water is.

There is no chivalry on the deck of the financial Titanic. We won’t hear, “Man the Lifeboats, women and children first” from the political class, central banks, union leaders and many business leaders. Those in power will protect themselves at all cost, even if it means inflicting pain on others.

When Bernanke instituted the bank bailouts he alluded to the effects on seniors and savers as “collateral damage”. Don’t expect any help, or much compassion from the ruling class.

The next election makes little difference. With few exceptions the political class stopped representing their constituents long ago. They are owned by their political donors and govern against the will of the majority. No matter who the president is – congress will follow their money….

The majority of voters support congressional term limits, mandatory drug testing for those on welfare and social security being the only retirement program for elected politicians; yet they never happen. Vote for the candidate of your choice, but don’t get deluded into thinking the problems that face our nation will be solved.

Man your own lifeboat. The headline, “Interest Rates at 5,000 year low” might be an attention grabber; but so what? It shows just how desperate the political class is all over the world. Most people don’t care what the interest rate was when the Pharos borrowed money or what rates were a decade ago. It is the here and now that concerns us.

As our population ages, borrowing money at low rates is not as appealing as getting out of debt and figuring out how to pay the bills. Today’s low interest rates are sinking every retirement plan in the world.

“We are a group of humble savers in traditional bank savings and money market accounts who are frustrated because…. we are getting near zero interest.

…. Think about the elderly among us who need to supplement their social security checks every month.

…. (F)igure out what to do for tens of millions of Americans who, with more interest income, could stimulate the economy by spending toward the necessities of life.”

To which Yellen responded:

“Thank you for your recent letter, …It may help to review a few basic facts.

…. low interest rates have primarily reflected a weak economy. The Fed’s efforts to revive the economy have helped create millions of jobs and fostered a stronger recovery overall.

Would savers have been better off if the Federal Reserve had not acted…? I don’t believe so ….”

Yellen’s total disregard for seniors and savers makes her message clear. The banks got a boatload of our tax dollars; everyone else must fend for himself or herself. Accept the fact we are on our own.

Maybe a life jacket? I recently stated my case for gold. ZeroHedge quoted Bank of America’s metals team as saying, “The World is Walking from Crisis to Crisis”, with the following graphic:

The world is in uncharted waters. Interest rates are lower than they have been for 5,000 years. I would speculate that since the birth control pill was perfected in the mid-1960’s, coupled with modern health care, the demographics of the world is unlike ever before. Aging baby boomers and retirees in the US and Japan are the largest population group. Retirees, coupled with the welfare class, outnumber the working class and something has to give.

There is good cause for concern. We don’t know if or when an economic collapse will come, nor do we know how it will look. History suggests many people will be hurt financially.

Dynasties and empires come and go; however the ingenuity of human spirit will survive and continue on. We may be witnessing history; however it is not time to dawdle. We don’t need a Titanic, just an ark of our own. Those who stay liquid, nimble, vigilant and alert will survive. Let’s make sure we are one of them, no matter what the future holds.

Last weekend I was the team scorekeeper for an 11-year-old baseball team. I’ve been watching kids baseball for 50 years and I still love it.

Sitting outside for two days with a heat index over 100 is exhausting. When we were kids, we didn’t have air conditioning, yet I don’t ever remember the heat bothering us. My how times have changed.

I’m reminded football practice starts August 1st for the kids. It’s like mentally changing direction and realizing fall is not that far away.

Our young grandsons got a long list of required school supplies. I would imagine it takes busy parents a good bit of time finding all the items in the big stores. Amazon has a great selection. My daughter tells me a lot of busy parents are saving a lot of time and money doing their back to school shopping on the computer. Should you be among them, please use this LINK. Your prices remain the same but we get a small stipend from Amazon that helps us keep this site free. I want to again thank all of you who use the link and help us out. It is much appreciated.

Good friend Snow C. sent along some quotes from a Lexophile. I looked up the word in the dictionary.

“Lexophile” is a word used to describe those who have a love for words, especially those set in a new framework. OK here goes:

And, in keeping with this week’s article –