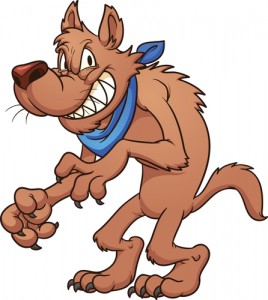 All five of us were huddled in the bathroom. Rain was pouring down in sheets, the noise was deafening. It sounded like a freight train. We sat on the floor and held our three small children close to us. Our small pre-fab home offered us little protection. We were terrified!

An hour later we went outside and found the neighbor’s roof in the middle of the street and the house was demolished. Thankfully no one was injured.

While that took place 50 years ago, it had a profound effect on my daughter Dawn. When her children heard the TV go, “beep – beep – beep, a tornado warning is in effect….”, our grandchildren knew it was time to head for the basement.

I asked Dawn if she was like the little boy-crying wolf about tornadoes. She said, “Anyone who has seen the terrible damage the wolf can do should never ignore the warnings.” Can’t argue with that.

The government is the wolf

When it comes to economic catastrophes we will not likely hear a government warning. The politicians want us to believe they have everything under control. Never forget the left wing and the right wing are part of the same bird.

Since the 2008 bank bailouts our inboxes are full of regular warnings; all kinds of doomsday scenarios. Each warning is complete with logical financial analysis predicting the end is near. I have written my share – Wolf! Wolf! Wolf!

Much like 2008, the wolves will decree a national emergency acting immediately in our best interest. Don’t believe it! It generally turns out to be in the best interest of the government.

The governments of Greece and Cyprus surprised their citizens with currency controls and confiscated money from people’s bank accounts. Roosevelt surprised the nation when he (by executive order) confiscated – then revalued gold.

The US debt clock shows unfunded liabilities of approximately $102 trillion (almost $854,000 per taxpayer). Eventually the pundits’ predictions about the debt will come true and all hell will break loose.

Wolves act in their best interest

When governments are facing a fiscal crisis their options are to cut the cost of government, raise taxes, or inflate the currency; sometimes to incredible levels. Forget about spending cuts – particularly “entitlements”. Politicians buy votes with our tax dollars. Cut off the freebies and they risk a revolution.

The wolves are cunning

The Federal Reserve wants to create inflation, the granddaddy of all stealth taxation. Devaluing the currency favors debtors (the government is the biggest debtor of them all), while destroying savers.

The highest inflation in most of our lives came during the Carter years.

You can use the handy inflation calculator and find the accumulated inflation amounted to 59.9%. If you bought a $20,000 Buick on 1/1/77 and they raised their prices equal to the inflation rate, that same vehicle would cost $31,984 in 1982.

Assume retiree, Joe Saver, bought a five-year 6% $100,000 Certificate of Deposit on January 1, 1977. Assume Joe remains in the 25% tax bracket and does not reinvest his interest. How did his investment do during that time?

While government bonds and insured CD’s are deemed safe, it means safe from default; your buying power is not protected.

The illusion of protection

At a recent Money Show I entered booths of four name brand money management firms. These dapper young folks all bragged about their sophisticated allocation formulas for ultra-conservative to high-risk investors – and anything in between. I asked, “How are you protecting your clients’ portfolios from high inflation?” Without hesitation, they all said “We can allocate a portion to TIPS”.

TIPS are Treasury Inflation Protected Securities. Treasury Direct says: “They were first auctioned in January 1997 after the market expressed a strong interest in the inflation-indexed asset class.” (Isn’t it ironic the wolf sells “wolf protection” insurance?)

TIPS pay a lower rate of interest. Treasury Direct outlines the complicated way interest rates are calculated while pointing out the big advantage they offer:

“The principal of a TIPS increases with inflation and decreases with deflation, as measured by the Consumer Price Index. When a TIPS matures, you are paid the adjusted principal or original principal, whichever is greater.”

Currently the interest rates for TIPS are 87% lower than that paid for government bonds for the same period. Buyers accept less interest for the added safety of protecting the principal from inflation.

Could TIPS have helped Joe? While TIPS didn’t exist in 1977, with some basic assumptions we can find out. Assume Joe invested 10% of his nest egg in TIPS paying 2% interest. It would be too risky to invest all his money. Joe is hedging his big bet ($90,000), not making another big one. We will also assume the inflation rate for each year was constant.

TIPS offer the illusion of portfolio protection. Joe may have protected his $10,000 investment from inflation but it did nothing for the rest of his nest egg.

Protecting your portfolio from inflation requires investing in assets that historically increase in value higher than the rate of inflation. I call this the umbrella effect. TIPS, by their very design, limit inflation protection to the amount you have invested in them – nothing more! To truly protect your “portfolio” from inflation, you must look at other asset classes.

If your investment advisor tells you your “portfolio” is protected from inflation because of an allocation of TIPS, beware!

Assets generally considered to be good inflation hedges are rental real estate, farmland, investment artwork, stock in companies that can pass on their inflationary costs to their customers, luxury condos in Paris, precious metals; the list is almost endless.

Gold is one of the most common assets mentioned. Let’s use it for an example because we have historical data readily available.

The chart below shows how much in principal and interest an investor would have under our three scenarios. 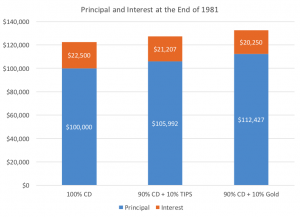 Gold would have not only risen with inflation, but also afforded an additional $6,435 in appreciation to offset some of the loss he took in other assets. That’s the umbrella effect. 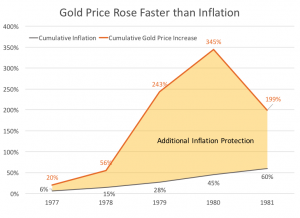 No matter which asset(s) combination you choose, your risk factor increases when compared to a fixed income government bond or insured CD. There is no guarantee that any historical data will repeat itself exactly the same way in the future.

In the case of gold, the price is volatile; active traders determine the price. Had Joe sold a year earlier he would have added another $10,927 to his umbrella protection. Gold traders buy in anticipation of inflation fears and sell early anticipating inflation will recede.

Inflation protection is a tradeoff. Those investing retirement money must factor the need for current income, longevity, risk tolerance, and potential reward. All in one basket is risky and each investor must seek the right balance. Investors must realize having inadequate inflation protection is also a HUGE risk.

Right now our inbox is going beep-beep-beep suggesting a tornado watch is in effect. While a tornado has not been sighted, conditions are ripe for one to leap out of the sky at any moment. There is a good reason Gold and Silver prices have jumped approximately 18% and 20% respectively since the first of the year.

Am I crying wolf? Yes, I am. Like a tornado watch, none has been sighted; however once one is in sight gold and silver prices will have already reflected the imminent danger. Better to take precautions.

Many pundits suggest a minimum of 10% of your nest egg should be in core holdings providing inflation protection. I would urge all readers to review their portfolios to make sure your “inflation protection insurance” allocations are up to date.

Better safe than sorry! Your life savings must be protected. Don’t say you were never warned!

This coming weekend my wife Jo is celebrating her 50th high school class reunion. She graduated from a small high school in an Indiana farming community that still has one stoplight – at the intersection of Main and Church Street.

Memorial Day weekend is deemed “alumni weekend” and all are invited. They set up tables in the gymnasium by graduating class. It’s not unusual for three generations of one family to attend. Her mother joked that you know you are getting old as your table gets closer to the back door. Grandma attended the reunions until she was almost 90.

Spouses are not invited. We go enjoy pizza and bread pudding in the Yellow Tavern. When the meeting is over, they shut down Main Street and everyone has a fun time. The world many baby boomers and seniors fondly remember remains alive in small town America.

Speaking of seniors, I encourage you to watch the movie “The Intern” with Robert De Nero and Anne Hathaway. It’s a great story that will hit home with a lot of our readers.

I’m going to paraphrase one line in the movie that really got to me. “Musicians never retire, they quit when there is no more music left to be played!” I realized it also applies to writers….

Here are some clever lines for all to ponder: