What Kind Of Recession Is This? 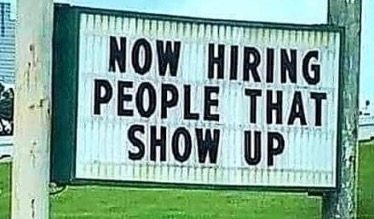 When we left Phoenix for vacation there were “Help Wanted” signs everywhere. Most retail stores were clamoring for help. Restaurants had entire sections of unused tables because they couldn’t get help to take care of customers. Retailers complained about delivery dates; vendors couldn’t get help to keep up with order demand.

It’s the same here in Indiana. Our youngest daughter owns a small trucking company, and they are scrambling to find drivers. Many work for a short time and quit saying they don’t like getting up so early in the morning, or some other lame excuse. Are they living that comfortably on unemployment?

I’ve seen photos of the Great Depression; hundreds of men lined up looking for a job…any job…so they could feed their family.

What the heck is going on?

With less money to spend, consumer demand decreases along with inflation. Fed Chairman Paul Volcker provided a textbook example during the Carter years. People lost jobs, the economy suffered, and inflation was brought under control. The economy rebounded, and we had good times for a couple of decades.

“And so…the strike-out is complete…

Strike one: real wages are going down…

Strike two: real GDP is going down (US in recession)…

Bill supports his claims – it’s scary when you look behind the curtain. Why all the “Help Wanted” signs?

I contacted our friend and expert Chuck Butler, editor of The Daily Pfennig. (It’s free and a daily must read) Chuck analyzes the data from the Bureau of Labor Statistics regularly and tells it like it is.

DENNIS: Chuck, once again, thanks for your time in helping educate our readers. In my recent column, What is normal? I pointed out in a normal economy, interest rates for both lenders and borrowers are above the inflation rate. Today – not even close!

Technically we are in a recession, but we are seeing “Help Wanted” signs everywhere.

Chuck, you analyze each week’s unemployment reports, what are they telling you about what is happening in the labor market?

CHUCK: It’s a crazy mixed-up world we live in these days, Dennis. Just last week we saw the Bureau of Labor statistics (BLS) print a 528,000 jobs created number for July…. But looking under the hood, I found that 340,000 of those jobs were created out of thin air by the BLS (they made up the number). That leaves only 128,000 real jobs created in July, and that would look like it should.

Each Month the BLS reports that 4.3 million people quit their jobs. I find this to be quite telling of the labor markets these days.

The pandemic, and subsequent economic shut down, has created a country of people that won’t work for minimum wage, won’t work long hours, and won’t work in an office, or restaurant, or retail store, etc.

That’s why you see so many HELP WANTED signs, people just don’t want to work any longer.

The Weekly Initial Jobless Claims have been ratcheting up in recent weeks and is beginning to look like it will explode higher very soon.

So, to sum it all up…. The employment situation in this country isn’t as rosy as the BLS or the Gov’t want us to believe it is. And all signs point toward very weak employment, during this recession that we are in.

“In 2008, the oldest Baby Boomers still hadn’t reached age 65. Now, most have, or are close to it, and some retired early due to COVID concerns. Subsequent generations aren’t big enough to fill the gap, hence the labor shortage that is keeping unemployment low. That could persist even with weaker business activity and consumer spending.”

“Many folks, including the Fed, are now suggesting that the old normal labor force may never return, that there were permanent changes in the labor market that we’re just now trying to figure out.”

I ask everyone who complains about lack of help, why is this happening? They all say the same thing, “The government is paying people not to work?”

What is your opinion? If real wages are down and the production sector is laying people off, how do people feed their families and maintain a reasonable lifestyle?

CHUCK: That’s a good question Dennis… I’m afraid for the people that did not save during the last expansion of the economy. A recession is not a bad thing, really… It cleans out the excesses of the previous boom, that in our case has lasted way too long. But because of the zero percent interest rates, and currency printing that the Fed did, the Boom economy lasted longer than it should have. So, the American people should have been saving/investing all during that time that the economy was booming.

If they didn’t, well… like I said above, I’m afraid for them, because this is not going to be a quick and done recession, in my opinion.

Dennis, many will be looking for more stimmy checks. If that doesn’t happen, people will not be able to feed their families and maintain a reasonable lifestyle if they haven’t saved/invested and built a nest egg to draw from in the coming months. It will be interesting, and perhaps sad, to watch it play out.

DENNIS: Wolf Richter discusses how the reduction in gas prices is helping to reduce inflation:

“The spike in gasoline prices motivated Americans to go on a buyers’ strike.

…. Consumers are resorting to all kinds of tricks to put a lid on their gasoline expenditures: Drive a little less, take it easier with the gas pedal, cut out unnecessary trips, plan shorter road trips, prioritize the most fuel-efficient vehicle in the garage, use mass transit, etc. These are behavioral changes.”

While those who feel they are saving the planet are probably delighted, I told my daughter “Prices are coming down for the wrong reasons”.

In most working families, both spouses are working. Having raised four children, the summer family vacation road trips gave mom and dad more than a break from their job. They strengthened the bond in the family unit. Summer vacations made memories that last forever. Our family had a few “Chevy Chase” moments.

If high gas prices are causing families to not take those types of vacations, that is a hidden cost with long term implications. If people are only driving out of necessity, as opposed to recreation, that is a drastic behavioral change.

Are you seeing any evidence of the “behavioral changes” he mentions?

CHUCK: I’ll tell you a story here that relates to what you’re talking about… In 2003, I bought a pop-up camper, with all the bells and whistles, and used it for our annual family camping trips.

After I was diagnosed with cancer in 2007 and had my subsequent surgeries, I was no longer able to go camping. My kids still wanted to go camping because they really enjoyed it.

My daughter, Dawn, took control of the camper, and they have used it since 2010. Last week Dawn called to tell us that they needed to get rid of the camper because they couldn’t afford to use it any longer. The gas their truck used to pull the camper had gotten too expensive, the camp site prices were going higher, and so on….

So, yes, I’ve seen behavioral evidence, in my family! It does not make them happy to have to make that kind of decision.

DENNIS: One final question. The stock market is reacting as you would expect in a recession, yet things are different.

I’m down in several investments, still collecting dividends, and feel “this too shall pass.”

What advice to you have for investors trying to protect their net worth?

CHUCK: Dennis, thanks again for the opportunity to share my thoughts with your readers.

For investors that like to think that they can “time a market”, they are fooling themselves.

And to make one more point here…. I don’t believe the Fed is going to stop their rate hikes just yet, so more damage to the stock market should be in the offering.

Dennis here. I agree with Chuck. While the government is passing a huge, “Inflation reduction act” it is a joke. It’s primarily political payoffs and politics that will increase the deficit and inflation.

I’d urge readers to be very cautious when it comes to the market. They may want us to believe the recession will be over quickly. A short market upturn may sucker a lot of investors. Trying to time the market and buy in at the bottom could be a costly mistake. Be patient!

We have really enjoyed our time in Indiana. Lots of good family time, ball games, meals together, you name it. We have been blessed with a loving family helping us set up our new summer home.

I’ve been taking periodic blood tests and the numbers have remained good. Next week we head back to Arizona and have several doctor appointments lined up over the next month. Back to reality.

Meanwhile, we have had tons of rain. Corn and soybeans are growing, a hardy green, and it looks like a good crop. The soybeans look like acres of beautiful green carpet.

I’m glad to see a good crop. Farmers are paying dearly for the diesel fuel they need to take care of their crops. I suspect we will see grocery prices continue upward.

“People try to live within their income…so they can afford to pay taxes to a government that can’t live within its income.”