Whistling Past The Graveyard 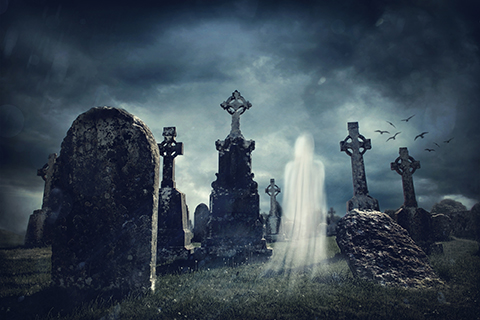 Fed Chairman Jerome Powell’s recent remarks really infuriated me. He is “Whistling Past The Graveyard”, again trying to deceive the public.

Wolf Richter shares some of his recent remarks:

They fact check Mr. Powell and tell us: (Emphasis mine)

“The three months of May, April, and March combine into an annualized core PCE inflation rate of 6.4%,…if price-increases continue for 12 months at the (same) pace…the annual inflation rate would be 6.4% as measured by the lowest lowball measure published in the US. This was the red-hottest three-month annualized inflation rate since August 1983.” 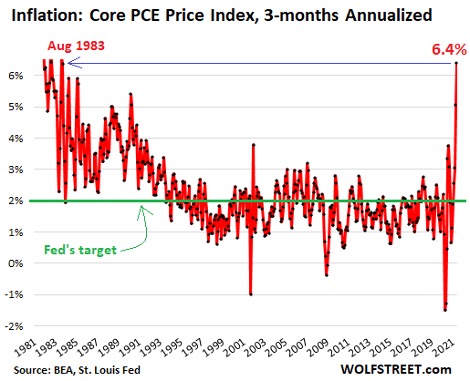 Meanwhile, the Fed does nothing but say they discussed inflation and may begin tapering in 2023 instead of 2024.

The Fed changed their targeted 2% inflation policy to an “average” of 2%, providing no details of how it was to be calculated. Real inflation is in double digits.

When Powell says, “high inflation readings will start to abate”, don’t expect prices to come down. Inflation causes economic pain for everyone, and they expect the world to rejoice when they loosen the screws a little bit? Cut the crap!

Powell wants the world to believe the Fed is confidently controlling the helm, inflation is of no concern, and we should remain calm.

Yes, I’m infuriated. Mr. Powell is talking out of both sides of his mouth trying to mislead the public, something the Fed has done since its inception.

In 2008, Congress passed “The Emergency Economic Stabilization Act of 2008”, commonly knows as the bank bailout. The bill failed the first vote. Some congressional arms were twisted (via political payoffs) and it barely passed.

The Fed was given trillions to bail out the banking system, saving them from economic collapse – due to their risk-taking. We were reassured the historic low interest rates were temporary. Despite Powell’s bravado, the Fed has no intention of raising rates back to 5-6% – ever!

“In an April 10, 2007 speech, Fed governor Frederic S. Mishkin admitted there is a connection between Fed monetary policy and ‘human misery, including lower living standards and increases in poverty as well as social pathologies such as…divorce, increased rates of violent crime and even suicide.’

He cited the inflationary 1970’s as an especially harmful Fed tinkering job, allegedly with good intentions.”

As to the “allegedly good intentions”, that too is a bunch of malarky.

Since the 2008 bank bailout, the Fed’s balance sheet has increased roughly $7 trillion. The Fed created money to monetize government debt, artificially keeping interest rates low – and bail out the banking system. Using back-of-the-envelope calculations, there are around 330 million Americans. That equates to $21,212 per person. Did you get your fair share? Me neither! So where did the money go?

I recall friend Chuck Butler explaining the FOMC, Federal Open Market Committee. What a joke! There is nothing “open” about it.

“In November 1910, six men…met at the Jekyll Island Club, off the coast of Georgia, to write a plan to reform the nation’s banking system.

The meeting and its purpose were closely guarded secrets, and participants did not admit that the meeting occurred until the 1930s. But the plan written on Jekyll Island laid a foundation for what would eventually be the Federal Reserve System.”

The Fed operates under complete secrecy. Their minutes are edited and not released until 30 days later. If you want the transcript, expect to wait another five years. Journalists seeking information must file lawsuits under the Freedom of Information Act – which the Fed regularly fights.

In 2016 I wrote about a bill in Congress to audit the Fed. Fed chair Janet Yellen (now Treasury Secretary, how convenient!) opposed the bill:

“Yellen argued that policymakers do not understand the economy well enough to come up with a rule that would reliably guide the economy through its ups and downs.”

Her implied threat to Congress worked, the bill didn’t pass, and the Fed has yet to have a true, thorough audit since its founding over a century ago.

What should Chairman Powell be afraid of?

Pam and Russ Martens at Wall Street on Parade (WSOP) have written countless articles exposing Fed and member bank corruption. Remember the Fed is owned by member banks, many who have been fined billions of dollars for criminal activity. Despite the political rhetoric, Powell’s job is to protect and enhance bank profits.

“Dennis Kelleher, the co-founder, President and CEO of the nonpartisan Wall Street watchdog, Better Markets, has issued a scathing rebuke of the Federal Reserve’s so-called “stress tests” of the mega banks on Wall Street, calling them “toothless.”

…. Making matters worse, the stress test program has been seriously weakened under the Powell chairmanship by, among other things, the removal of two key components: the inclusion of dividend payouts and a growing balance sheet. If those factors were included, as they should have been, the banks would have had materially lower post-stress capital ratios.”

According to Kelleher, Chairman Powell is serving the big banks well: (Emphasis mine)

“Kelleher says the Fed “trumpeted” the fact that all of the banks passed the stress tests to justify letting the banks launch a “flood of dividends and share buybacks likely to approach $200 billion and exceed bank earnings by as much as 167%.”

“Bloomberg News reporters Lisa Lee and Shahien Nasiripour (reported)…that Bank of America, Citigroup, JPMorgan Chase and Wells Fargo had, since 2017, spent more on dividends and share buybacks than they had earned. The reporters wrote: (emphasis mine)

‘…. The four banks cumulatively returned about $1.26 to shareholders for every $1 they reported in net income…Citigroup returned almost twice as much money to its stockholders as it earned…. The banks declined to comment.’

According to an audit conducted by the Government Accountability Office (GAO), those four banks…are paying out more to shareholders than they are earning received the following amounts in cumulative secret loans from the Fed, at interest rates of almost zero, from 2007 to 2010:

Where exactly are all of these trillions of dollars of bailouts to the Wall Street mega banks coming from?

…. The money is coming from…the Federal Reserve Bank of New York (New York Fed), that bailed out these banks and their foreign counterparties during the last financial crisis.

The New York Fed is permitted by Congress to electronically create this money out of thin air.”

WSOP adds, There Is Not One Elected Official at the Federal Reserve, But It Has Been Unilaterally Rewriting the Rules on Wall Street Since 2007. On the stress test:

“That exercise is nothing more than a shell game to mislead Congress and the public into believing that actual due diligence is being done by the Fed on these massive federally insured banks with their inhouse trading casinos.”

Wakeup call for politicians? Naah! It’s truly bipartisan, the politicos ignore the situation while the Fed creates money for them to buy votes.

“That the Fed is still allowed by Congress to have anything to do with supervising these banks shows just how far down the rabbit hole Wall Street’s money and influence in Washington has taken the country.

There is only one institution in America that has less credibility than the mega banks on Wall Street. That’s the Federal Reserve. Despite not having one elected official among its ranks, the Fed has unilaterally altered the U.S. financial system into a grotesque version of itself.

…. In what kind of democracy does an institution lacking even one elected official get to unilaterally prop up insolvent banking behemoths after those same banks cratered the U.S. economy?”

Powell’s inflation concern? The Fed is quite content with “human misery, including lower living standards and increases in poverty” as long as it is profitable for the banks. Powell’s dilemma is the rate of inflation causing the citizens to rise up in protest and destroy the banks money machine.

It’s time to dump the Fed, send banking executives to jail for convictions of criminal activities, reinstate Glass/Steagall and outlaw corporate stock buybacks. Might as well include Congressional term limits to the list. It will take one heck of a political uprising for that to happen; it may be brewing.

Make no mistake, Powell is “Whistling past the graveyard!”

We just passed the sixth anniversary of Miller On The Money. Many readers have been with us from the beginning. We’ve been through a lot since we started. I’m now 81, a cancer survivor, and still LOVE what I do.

When I started, friends questioned my sanity for publishing a FREE newsletter that costs me money. First off, I want to say “thank you” to all our readers for your encouragement and support, both emotionally and financially. It means a lot.

I want to thank my wife Jo in particular. Today, she encourages me, helps me and understands just what Miller On The Money means to my wellbeing. I am truly blessed.

While our publication is far from a financial success, my sanity does not come into question anymore. At my age, feeling that I might still be able to make a positive contribution is a good reason to keep on keeping on!

Friend Phil C. sent along a cool song by Alan Jackson titled, “The older I get”.

These lyrics summarize my feelings well:

And the older I get
The truer it is
It’s the people you love, not the money and stuff
That makes you rich.

The older I get
The longer I pray
I don’t know why, I guess that I’ve
Got more to say.

And the older I get
The more thankful I feel
For the life I’ve had and all the life I’m living still.

This quote seems fitting for this week’s article:

“People of privilege will always risk their complete destruction rather than surrender any material part of their advantage. Intellectual myopia, often called stupidity, is no doubt a reason.

But the privileged also feel that their privileges, however egregious they may seem to others, are a solemn, basic, God-given right.” — John Kenneth Galbraith

Friend Alex N. sent along some cute signs for our enjoyment. 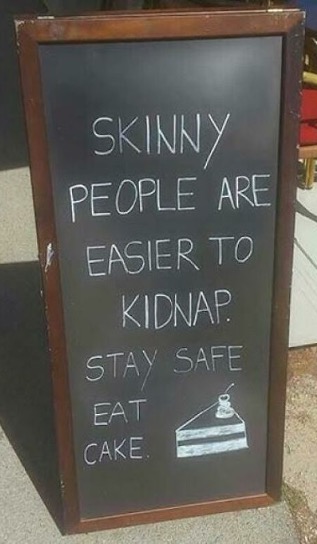 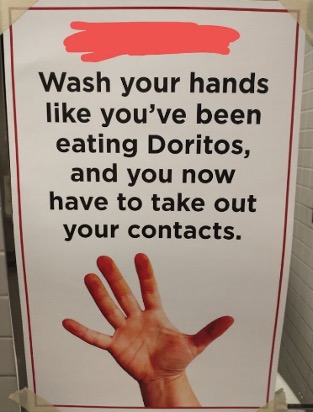 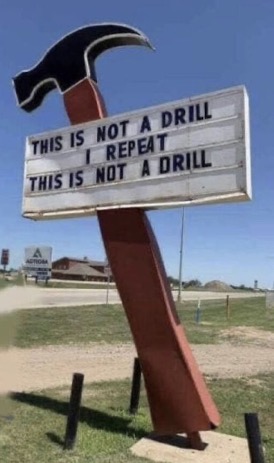 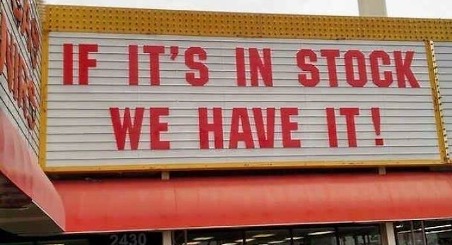